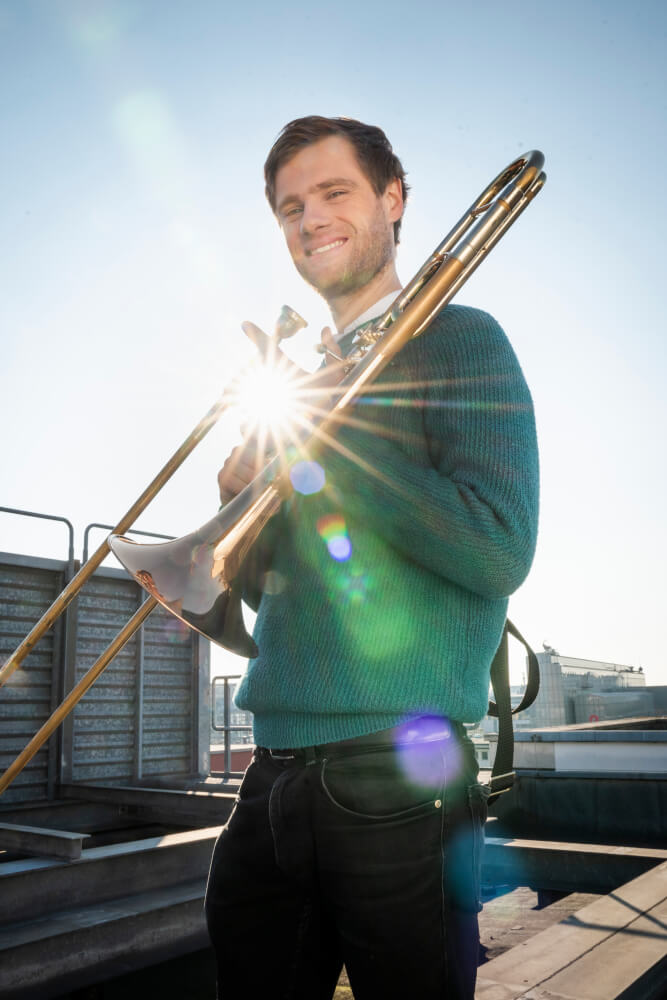 Kris Garfitt is first prize winner of the International ARD Music Competition in Munich, a Courtois Performing Artist and Solo Trombonist of the WDR Symphony Orchestra. On top of this he had competition success as the Gold Medal winner of the 2019 Royal Overseas League Music Competition in London and first prize winner of the 2019 Jeju International Music Competition, 2018 International Tenor and Bass Trombone Competition in Budapest, the 2018 International Juozas Pakalnis Competition of Wind and Percussion Instruments in Vilnius and the 2019 International IPV Trombone Competition in Germany. As well as winning the first prize in the ARD Competition, he also won the public prize plus numerous ‘special’ awards.
He graduated in 2015 from the Guildhall School of Music and Drama in London with a First Class Honours Degree. During his time at Guildhall he undertook regular lessons with Eric Crees, Peter Gane and Christopher Houlding and later with Fabrice Millischer of Freiburg Musikhochschule and Guilhem Kusnierek at the Hochschule for Music Saar.
From 2016 until 2020 Kris was working as a member of the German Radio Philharmonic, and from 2021 is the solo trombonist with the WDR Symphony Orchestra. Besides regular concerts with his orchestra, he is performing frequently as guest solo trombonist with many of Europe’s leading orchestras such as the Royal Concertgebouw Orchestra in Amsterdam, City of Birmingham Symphony Orchestra and BBC Scottish Symphony Orchestra (to name just a few). He is fortunate enough to have been a member of both the European Union Youth Orchestra and Gustav Mahler Jugendorchester and travel extensively throughout the world, performing at places such as the Concertgebouw in Amsterdam, the Royal Albert Hall in London, Salzburg Festspielhaus, Hamburg’s Elphilharmonie, the Semperoper in Dresden, Berlin Philharmonie, Prague’s Rudolfinum, Teatro Alla Scala in Milan, and the Seoul Arts Center, and perform in festivals such as The BBC Proms and Salzburger Festspiele.
Alongside his orchestral career, Kris also manages to navigate a busy schedule as a solo musician. He has performed as soloist with orchestras on numerous occasions, with professional ensembles such as the Bayerische Rundfunk Symphony Orchestra, Munich Chamber Orchestra, Vilnius City Chamber Orchestra, the Budapest Strings Chamber Orchestra, Jeju Philharmonic Orchestra, Orchestra Di Padova e del Veneto and Luxembourg Military Orchestra. Shortly after winning his job in 2016 Kris experienced an increased interest and love of the trombone’s wonderful solo literature, leading him to start a duo with the exceptional Korean pianist, Seri Dan. Together they perform regular concerts throughout Germany and worldwide. They are also planning to release their first album in 2022.
Kris also has a passion for music education and regularly offers guidance to trombonists of all levels, on a private basis and in the form of masterclasses. He has been the brass tutor of the City of Sheffield Youth Orchestra since 2016.