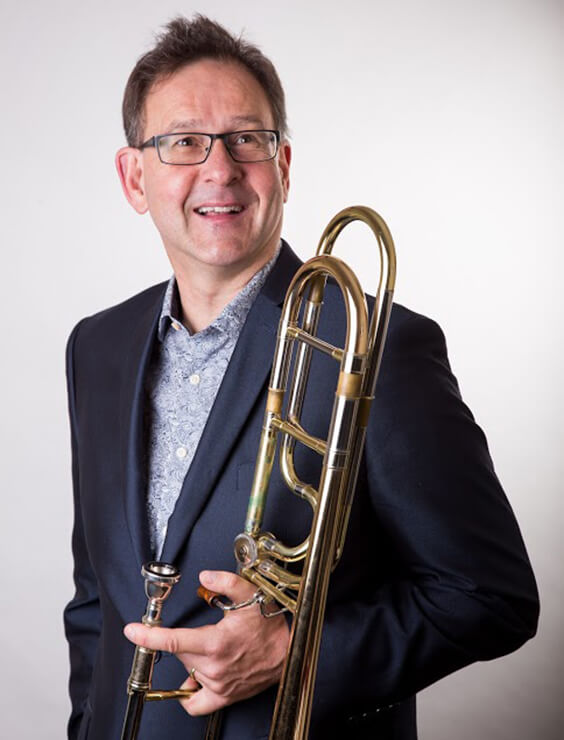 One of the most influential brass players of our time, now a soloist, conductor and pedagogue, Ian Bousfield has been at the top of his profession for over 35 years, having formerly been principal trombone of the Vienna Philharmonic and London Symphony in an orchestral career that spanned thirty years. As a soloist he has appeared with, amongst others, Riccardo Muti, Michael Tilson Thomas, Sir Neville Marriner and Kent Nagano with the Vienna Philharmonic, London Symphony, London Philharmonic and the BBC Philharmonic. He has recorded for EMI, Chandos and Camerata. Future plans include appearing with Kent Nagano and the Montreal Symphony, recording with the Airies Quartet, conducting the season-opening brass concert of the New World Symphony in Miami for the third time and directing the Aalborg Symphony in a series of concerts for brass and voice.
In recent times his conducting career has taken off, seeing Ian regarded as one of the world’s foremost brass conductors. He has conducted the Oslo Philharmonic, Liceu Opera, Danish Radio Symphony, Copenhagen Opera, Sonderborg Symphony, Bern Symphony, Norlands Opera and the New World Symphony.
Ian is professor of trombone at the Hochschule der Künste in Bern and the Royal Academy of Music in London. His former students sit in some of the world’s premier orchestras and have won the most prestigious competitions including the ARD and Royal Overseas League. His book and videos, “Unlocking the Trombone Code” have met with great critical acclaim. He is a brass coach for the Gustav Mahler Youth Orchestra and a regular coach of the New World Symphony, two things that lie very close to his heart. He was awarded the ITA award in 2012, a lifetime honor from the International Trombone Association.
In June 2019 Ian was Chair of the first ever Tchaikovsky Competition for Brass at the invitation of Valery Gergiev.
Despite living outside of the UK for 20 years, Ian remains obsessed with cricket. His main hobby is the wines of Burgundy, and in 2017 he was honoured by the region, being made a ‘Chevalier de Tastevin’.